The Tanganyika Laughter Epidemic of 1962

You may have heard of the Tanganyika (now Tanzania) Laughter Epidemic of 1962 already.  It was the subject of an amazing episode of Radiolab, was included in the 2009 documentary Laughology, and has been featured on plenty of websites.  And with good reason: it makes a great story.

However, with the exception of Radiolab, the epidemic is usually treated as an amusing oddity, or even a positive, if silly, experience.  "Isn't laughter great!?  Can you imagine whole villages laughing for months?  Crazy, huh?  How fun!"  I bet you can see where this is headed...

Here at HoJ Horror, we strive to view things through a creepier lens, peeling back the fluffy exterior of the world and staring at its more gruesome contents.  By the time we get to the end, I hope you'll be able to see how the Tanganyika Laughter Epidemic is terrifying in two ways.  Spooky in itself, and also spooky for what it means.

Let's start with the facts:  On January 30, 1962, three girls started laughing in a mission-run boarding school in the village of Kashasha.  On the western shore of Lake Victoria, near Uganda, the laughter spread through the school, afflicting another 95 students.  While the teaching staff remained immune, the girls between the ages of 12 and 18 would laugh and cry uncontrollably for hours.  The 64 children unaffected by the laughing were unable to concentrate during classes, and on March 18th of that year, the school was closed down entirely.

Once the school closed, the girls were sent home, and the laughter spread.  In the village of Nshamba, 217 children and young adults came down with the laughter in April and May.  In June, the laughing hit another girls' school in Ramashenye.

As the condition spread, it soon began to infect adults of all ages, men and women.  Entire villages would suffer from the hysterical condition for days on end.  Sometimes the laughing would ebb away, only to return days later.  This continued for 18 months throughout the north-west corner of Tanganyika until the middle of 1963.  It is said to have affected up to 1000 people.

It is important to note that the symptoms of the laughing sickness were not limited to giggling.  Pain, fainting, respiratory problems, attacks of ceaseless crying, and random screaming were all a part of the 'laughing'.

Here is an excerpt from Laughology, the aforementioned documentary.  Despite its attempt at light-heartedness, it comes off as a nightmare.

But why did these people laugh, cry, and scream for hours upon hours, stretching into days?  The first approach is to compare it to other instances of 'mass hysteria'.  Most of these episodes strike young women between the ages of 15 and 20.  Consider the Salem Witch Trials or, more appropriately, the "Strawberries with Sugar Virus" of 2006.  Indeed, the Tanganyika Laughter Epidemic did start with adolescent girls, but it eventually spread to include adult men.  Besides, it's super-condescending to chalk this up to "teen girls are just hysterical."

Another point to be made is that this episode differs from other incidents of madness that can be attributed to environmental factors.  I've got some articles in the works examining the effects of Ergotism and Kuru, but the epidemics associated with these maladies are clearly traceable to biological factors.  The Tanganyika Laughter Epidemic, on the other hand, shows no evidence of toxic exposure or disease.  As Christian F. Hempelmann noted in this article for the Chicago Tribune, the Epidemic qualifies as a legit Mass Psychogenic Illness (MPI).  Meaning, it was an affliction caused entirely by the minds of its victims.

However, we're still faced with the question of why?  Well, to draw on some conclusions Hempelmann has made, it was likely connected to the immense changes that Tanganyika was going through at the time.

Tanganyika declared its independence from the British on December 9th, 1961, only weeks before the epidemic began.  As the nation transitioned, the people were subject to incredible social upheaval.  When the government switched to Socialism, it not only rearranged the economy, but also outlawed many of the local tribal religions (supplanted by Christianity).  Faced with such sweeping changes, the rural villagers of Tanganyika were under significant stress.

To quote Hempelmann: "There is an underlying shared stress factor in the population.  It usually occurs in a group of people who don't have a lot of power.  MPI is a last resort for people of a low status.  It's an easy way for them to express that something is wrong.

In other words, the people caught up in the Epidemic couldn't find any other way to release their anguish.  When they failed to cope, they were left with nothing but humorless, hysterical laughter that exhausted their bodies.  Laughter that took turns with inconsolable crying and screaming.

Words failed them, so they laughed.

For more content about the Tanganyika Laughter Epidemic, and a great theory about caterpillar ghosts, check out this episode of Radiolab:  http://www.radiolab.org/story/91595-contagious-laughter/
Posted by Unknown at 8:00 PM 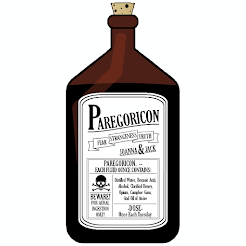